Author: Sneha Narayana Pillai
Published: May 10, 2021 in the Indian Express

More women are voting than before, and this rise in political agency could mean that their rights and issues are no longer an afterthought for policymakers. 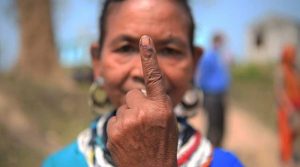 The results of the assembly elections in Assam, Kerala, Puducherry, Tamil Nadu, and West Bengal have made one point clear – the rising significance of women’s role in shaping political outcomes. High voter turnout was noted among women across all states, with women voters exceeding men in Kerala and Tamil Nadu.

Political commentators as well as several exit polls have noted the influence of women voters in determining the performances of parties across states in these assembly elections; a phenomenon that has been increasingly observed in the last decade. For instance, Himanta Biswa Sarma, now chief minister of Assam, has publicly said that they owe their victory to the women voters. In West Bengal as well, many commentators have credited high women turnout for the victory of Mamata Banerjee-led Trinamool Congress.

Most leading parties, cognisant of the power of the female vote, had also tailored their political campaigns and election manifestos to speak to the needs of women in these states, with poll promises including financial assistance to homemakers and women-led households.

From a monthly stipend of Rs 500 being promised for female heads of a family by the Mamata Banerjee-led Trinamool Congress in West Bengal, to a monthly “value rights assistance” of Rs 3,000 promised to homemakers in Tamil Nadu by the Kamal Haasan-led Makkal Needhi Maiam, the amounts varied, but the target beneficiaries remained the same across the states.

Free and subsidised transport for women, free home appliances, increase in maternity benefits, reservation for women in government jobs were some of the other electoral promises made in a bid to win women’s votes. However, even as these women-centred promises did not lead to a higher representation of women in candidate lists, especially in states like Assam and Tamil Nadu, there are several reasons why the rise of the “female voting bloc” is remarkable.

Studies by various organisations have shown that men and women vote quite differently, with women more likely to vote for change and prefer a welfare-oriented party, prioritising access to basic provisions such as healthcare, water and sanitation, while men lean towards infrastructural investment.

This was also observed during the victory of the Aam Aadmi Party during the 2020 elections in New Delhi, with exit polls noting that the party was the preferred choice among women voters, who found schemes such as free bus rides, subsidised water and electricity to be politically relevant. This trend has also previously been observed during Jayalalithaa’s victory in Tamil Nadu in 2016 and Nitish Kumar’s return to power in Bihar in 2015, among others.

Over the last few years, the gender gap in voter turnout has reduced significantly. While men held an 8.4 percentage-point turnout advantage over women in national elections in 2004, within a decade, that gap had shrunk to just 1.8 percentage points.

Based on a close look at the gender-wise voting choices in the 2014 Lok Sabha elections, LiveMint observed that female voters were likely to prefer women-led parties. In the long term, as women emerge as an even stronger voting bloc, it could also encourage parties to field more female candidates and ensure better political representation among women.

It would be naive to think of the female voting bloc as a homogenous group who care about the same issues. Women in India, much like everyone else, continue to vote on the basis of other identities, including caste, religion, etc., but given their similar lived experiences, there are certain considerations (some of which have been discussed above) that shape the way they vote.

The hope is that with the recent trend of catering to the female voting bloc, that political parties across the spectrum become more gender-responsive, ultimately leading to policy changes that improve the lives of women.

This is of particular significance in the shadow of the COVID-19 pandemic, where it’s widely observed that the impact of the pandemic has been the harshest on women. In a bid to reach out to the female voting bloc, all political parties attuned themselves to such gendered disparities and it is hoped that they will follow through their election promises, to provide extra support to women to tide through this crisis.

In the current scenario, where a gender gap continues to exist in most spheres in India, ranging from digital access to labour force participation, there’s hope that with the increasing recognition of the power of the female voting bloc, women’s interests will no longer an afterthought in policymaking; taking us closer to realising the objectives of the early suffragists.