We owe it to India’s daughters and their parents the same right to care for each other and be cared for by each other as we have for sons in our society, in life or in death. 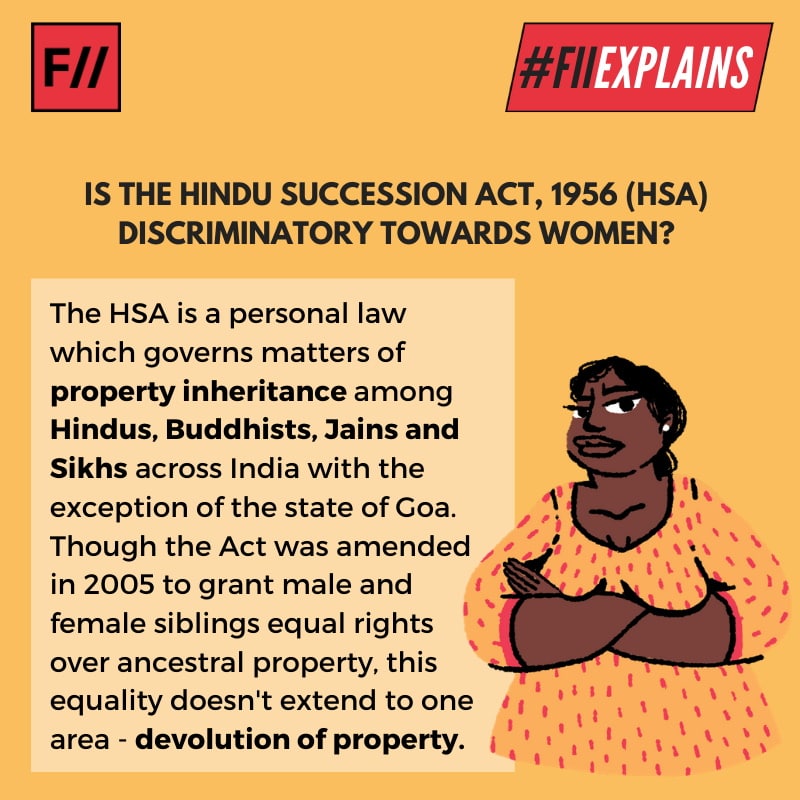 Imagine a married couple without any children. The husband and wife work their whole lives, build their property and stash away savings in a joint bank account – hoping it will help in taking care of their ageing parents. Yet, when they die suddenly, without a will, all of their movable and immovable property is transferred to the husband’s parents. The wife, although economically independent and empowered, fails to provide for her parents because the 1956 Hindu Succession Act (HSA) which applies to 80% of India’s population including Buddhists, Sikhs, and Jains, dictates different schemes of property devolution for men and women if they do not have a surviving spouse or children: All of the husband’s property goes to his natal family, but the women’s property devolves to her in-laws.

Sections 15 and 16 of HSA are a point of contention in two landmark cases, one before the Supreme Court (SC) and another before the Punjab and Haryana High Court. In the first case earlier this year, the SC asked the government for its views. Shockingly, the government backed these provisions, failing to take into account the increased role of women in the economy, vastly changed family structures since 1956, and the blatant gender discrimination that this law legitimises.

On the one hand, we have laws such as The Maintenance and Welfare of Parents and Senior Citizens Act, 2007 which holds ‘all children’ equally responsible for the welfare of their aging parents and based on which successive judgements have emphasized that married daughters are responsible for their parents. On the other hand, we have provisions such as Section 15 in the HSA which systematically take away the right from daughters to provide support for their parents in the event of her untimely death. When the law exhorts daughters to care for their parents at par with sons, it also needs to provide an equal footing to both sons and daughters in the case of devolution of property after their death.

The changing demography adds more urgency to the need for reform. India’s Total Fertility Rate (the number of children an average woman will bear in her life) is 1.6 in urban areas and 2.1 in rural areas, indicating that fewer couples have children, and those who do have fewer children. In addition, the proportion of couples with only two daughters who accepted sterilisation more than doubled from 16% 1992-1993 to 33.6% in 2015-2016 (National Family Health Survey-4/NFHS-4), indicating higher acceptability of daughters as only children than earlier. Further, 42% of women own a house, and 32% of women own land jointly or independently. All these numbers indicate that women now hold more assets, they are the sole providers for their aged parents more often, and they do not leave behind children after their death as often. So, the number of people affected by HSA will only increase over time.

The Hindu Succession Act in its current form perpetuates the belief that women solely belong to their ‘married household’ after their marriage – a commonly cited reason for the preference for a male child as parents consider sons a safer insurance for their old age. No wonder, according to NFHS 5, the number of married people who want more sons than daughters is still several times the number who want more daughters than sons.

A paper published by National Institute of Public Finance and Policy in 2020 examined these provisions in HSA and suggested an amendment along the lines of the Goa Succession, Special Notaries and Inventory Proceeding Act, 2012, and the Indian Succession Act, 1925, which put men and women on par when it comes to devolution of property. The existence of these legislations points to the fact that legal precedents for an equal scheme of devolution already exist and parts of Indian society have already had years of experience with them.

One hopes that taking cognisance of the scholarship available on this topic, the government will revise its stance and bring an amendment to the Hindu Succession Act in the Parliament to correct this injustice. In the meanwhile, one also hopes that progressive states will amend these provisions given that succession is a concurrent subject. In absence of sincere efforts to root out the patriarchal biases from our laws, campaigns such as ‘Beti bachao, Beti padhao’ will fail to change long-held prejudices. We owe it to India’s daughters and their parents the same right to care for each other and be cared for by each other as we have for sons in our society, in life or in death.

Author: Aparajita Bharti is a daughter, also the Founding Partner of The Quantum Hub, a Delhi based policy research and consulting firm