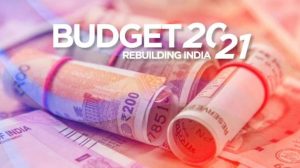 While there have been some small announcements for women in the budget, women’s core concerns over food and nutrition, employment and livelihoods, and prevention of violence and safety after a year of unprecedented hardship need a further boost.

The Finance Minister’s speech in the Union Budget 2021-22 acknowledged the role of frontline workers in battling the pandemic throughout last year and expressed gratitude for their efforts. It is important to note that almost all of these frontline workers are women and budget announcements have an important impact on the lives of women.

Gender-responsive budgeting in India was adopted in 2005 and since then there have been steady budgetary allocations to different programmes specific to women and in women–related programmes, which are usually part of the gender budget statement of the Annual budget documents. This year has also not been an exception. However, it will be important to note that the pandemic year witnessed hardships for women in terms of securing food and nutrition security, a crisis of employment and livelihood opportunities, increased burden of unpaid work for women and also increased incidence of violence. It is in this backdrop we look at the provisions made for women in this budget.

Two significant announcements that directly impact women’s labour force participation were made by the Finance Minister in her speech.

The first was to universalise water supply facilities through the Jal Jeevan Mission in both rural and urban areas and allocating a massive Rs. 50,000 crores to the programme. This allocation needs to translate into the reality of providing clean drinking water facilities across households in the remotest parts of the country. This is a welcome step that has the potential to reduce women’s time spent on collecting water. The recent time use survey 2019 shows that women spend on an average up to 55 minutes daily to fetch water for the household. Having provided a steady source of water supply has immense potential to reduce this time and cater to the urgent need to improve household infrastructure for women.

The second announcement pertained to extending the coverage of social security benefits for gig and platform workers. It is important in the current context as these are emerging avenues of women’s employment in urban India. The IWWAGE report shows how attractive these opportunities are for women and extending the social security coverage makes the sector even better.

The budget allocations under the social security schemes for workers show an increased allocation of Rs. 3100 crores under Atmanirbhar Bharat Rojgar Yojana – a programme launched as a new scheme to encourage new employment in post lockdown period by providing a fixed share of wages into the EPF funds. While this may be important, the budget does not provide extra allocations for social security of gig and platform workers separately.

In the wake of the pandemic and its unequal impact on women, an analysis of the gender budget (GB) however reveals certain underwhelming trends. The GB stands at Rs. 153,326 crore for 2021-22 BE. Last year’s allocation was Rs. 143,461 crore (BE). As a proportion of total expenditure, the current allocation has fallen to 4.4%, from 4.7% last year.

In the same vein, the allocations to women-specific programmes, reported in the part A of the GB statement Rs. 28,568 crores last year to Rs. 25,261 crores – a decline of almost 12%. Similarly, allocations to the Ministry of Women and Child Development also show a decline of 18.5% since last year.

While the quantum of allocations to most important programmes for women reported in the budget 2021-22 show a status quo or a decline, few accounting changes and a couple of interesting allocations towards women could be located. The announcement of Saksham Anganwadi and Poshan 2.0 clubs the erstwhile umbrella ICDS, Poshan Abhiyan, Scheme for Adolescent Girls, and National Crèche Scheme and allocates only Rs. 20,105 crores, the Mission Shakti –SAMARTHYA clubs smaller programmes including Pradhan Mantri Matru Vandana Yojana, and Beti Bachao Beti Padhao. The detailed breakups and comparisons are provided in Figure 1 and 2. below:

Figure 1. (all scheme heads taken from pg. 351 of the Statement of Budget Estimates)

Figure 2. (all scheme heads taken from pg. 351 of the Statement of Budget Estimates)

The numbers show that allocations to crucial programmes catering to nutrition, creches, and women’s safety and protection have at best stayed the same if not reduced. The allocation to the umbrella ICDS schemes that are under the new ‘SAKSHAM’ head clearly shows a 23% decline of Rs. 5952 crores. We also do not see separate allocations for One Stop Centres, women helpline, Swadhar Greh, Ujjawala and so on which were overwhelmingly used during the pandemic, with heightened reports of violence against women. Instead, those have been clubbed under Mission Shakti— SAMBAL (See Figure 3 below).

Figure 3. (all scheme heads taken from pg. 351 of the Statement of Budget Estimates)

Both MGNREGA and NRLM show increments in budgets since last year. However, the increase in the MGNREGA budget by Rs. 11,500 crores will also need to cater to the increased demand for jobs under the programme. In fact, the GB reports an allocation of only 33% of the total NREGA allocations for women while the Economic Survey itself highlights that almost 50% of all NREGA employment are held by women. These figures itself reveal the need for greater allocation even without expanding the number of days of employment generated under the programme.

The NRLM budget also shows an increase of almost Rs. 4000 crores from the previous year on account of the programme component. However, the allocations do not make it clear whether the increment is on account of increased expenditure on DDU-GKY, or on account of interest subventions to SHGs or the loan moratoriums.

Despite these dampers, an interesting allocation in the GB geared towards closing the gendered digital divide is also spotted. According to the NSS-MoSPI data from 2017-18, only 38% of women own mobile phones and 12.8% use computers compared to the respective male figures of 71% and 20%. Given the need to be digitally included, the GB includes Rs. 120 crores (or almost 40%) of the allocations to Pradhan Mantri Gramin Digital Saksharta Abhiyan – digital literacy programme for rural areas. Albeit small yet in the last few years, this is the first time that GB has included part of the PMGDISHA in its statement. This may have the potential for improving women’s access to opportunities created through digital platforms.

So while there have been some small announcements for women in the budget, women’s core concerns over food and nutrition, employment and livelihoods and prevention of violence and safety after a year of unprecedented hardship need a further boost. These concerns assumed importance in all pre-budget discussions and also made space in the Economic Survey.

While announcements in the budget indicate acknowledgement of these issues, which is a significant first step, budgetary allocations to support them would be truly transformative for half of India’s population.

—
Sona Mitra is the Principal Economist at Initiative for What Works to Advance Women and Girls in the Economy (IWWAGE) an initiative of LEAD at Krea University. Sonakshi Chaudhry is a Senior Analyst at The Quantum Hub (TQH), a policy research and communications firm.