While the need for a centrally administered UEGS has been acknowledged by the central Ministry of Housing and Urban Affairs, funds availability remains a constraint. 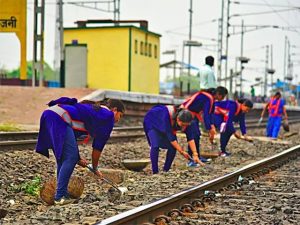 The pandemic and subsequent lockdown measures have taken a toll on all aspects of life in India, particularly employment. Over 21 million salaried jobs have been lost between April and August 2020 and urban unemployment is as high as 7.5 percent as of October 25, 2020. Job losses also seem to have affected women disproportionately. Reports show that the number of men who reported themselves as employed dropped by 29 percent between March 2020 and April 2020, while for women the change was much greater at 39 percent.

Given the gloomy prospects induced by the pandemic, leading policy experts have urged the government to step in and ensure some semblance of livelihood guarantee in urban areas, as the Mahatma Gandhi National Rural Employment Guarantee Act (MGNREGA) does for rural areas.

Advocates for an urban employment guarantee scheme (UEGS) argue that such a scheme would provide multiple benefits and alleviation measures during a crisis such as now. First, it would provide livelihood options to over 7 percent unemployed persons in urban areas.

Second, an urban employment guarantee scheme may provide an opportunity to increase female labour force participation rates (FLFPR) in urban areas, much like it has in rural areas. Close to 50 percent (or more) workers under MGNREGA are women, who participate in the scheme on account of factors like insufficient agriculture work, migration of men to cities, lack of skills to do other work, illiteracy, or the availability of wages higher than other available options in rural areas.

Third, the works undertaken under the UEGS may create assets that improve the town’s ecology and quality of public services, which have a direct impact on productivity and quality of life.

Recognizing the need to provide livelihood support in urban areas, various state governments have stepped in with their own urban employment guarantee schemes. For example, Odisha, Himachal Pradesh, and Jharkhand have announced their own urban employment schemes after the onset of the Coronavirus epidemic. Apart from these states, Kerala has an existing Ayyankali Urban Employment Guarantee Scheme (AUEGS). The AUEGS has been successful in creating work opportunities for women, with 80,735 and 96,259 women benefiting from the scheme in 2018-19 and 2019-20 respectively.

There are also global experiences to draw from: Argentina introduced Plan Jefes, in response to its 2001 currency crisis, which offered voluntary job opportunities to unemployed heads of households in community projects; the programme specifically targeted women. South Africa implemented its Expanded Public Works Programme in 2004 which created paid work opportunities for large numbers of unemployed people, primarily women and youth; the programme, interestingly focused on developing home-based care and early childhood development centres in communities, services that women benefit from as well as run themselves.

However, while the need for a centrally administered UEGS has been acknowledged by the central Ministry of Housing and Urban Affairs, fund availability remains a constraint.

Designing an urban employment guarantee scheme with a gender lens

Based on state level and global experiences, we outline a few principles that may be followed if the UEGS were to be implemented to the maximum benefit of women in urban areas.

First, the nature of jobs provided under the scheme should be acceptable as much to women as to men, as well as should take into account the aspirations of the urban women. It is important for policymakers to consider that women residing in urban India, may have different aspirations than women in rural areas who avail MGNREGA wages. This could be achieved by providing for a list of work appropriate for women as well as a list of community assets that reduce gender vulnerabilities, e.g., community sanitation facilities, planting of trees near slums for shade, assistance in healthcare/educational facilities, running of community kitchens etc.

Second, distance to the workplace is a critical factor for women in urban areas in deciding whether to take up a job. Therefore, jobs under any urban guarantee scheme should be available around the city so that women can avail work at a place near their residence.

Third, equal wages as those promised to men is one of the key reasons that attracts women workers to MGNREGA works, and should be provided for even under a proposed UEGS. This can be achieved through publication of standard rates for jobs offered under the scheme.

Fourth, various studies have shown that women prefer forms of employment that allow them more flexibility at work as they juggle paid work and unpaid work during a given day. Experts, therefore, suggest including elements of a gig economy model in the UEGS, giving flexibility to women to work certain number of days per week or getting remunerated for the number of jobs done rather than being paid on a per day basis.

A well-designed scheme that uses a gender lens from the outset can not only reduce the immediate problem of unemployment in urban areas but can also (potentially) revive the stagnant and abysmally low FLFPR in urban areas, which has been a long-standing worry for India.

—
Soumya Kapoor Mehta is the Head of the Initiative for What Works to Advance Women and Girls in the Economy (IWWAGE), an initiative of LEAD at Krea University; and Deepro Guha is a Manager at The Quantum Hub (TQH), a policy research and communications firm.